Research from the University of Leicester confirms the link between prolonged sitting and risk of disease.

A team of researchers at the University of Leicester conducted a review and meta-analysis of 18 studies and nearly 800,000 participants.

The researchers searched several health databases to find studies that met their criteria. Comparing greatest sedentary time to lowest, the researchers determined that too much sitting is associated with an increased risk of diabetes, cardiovascular disease and death. Specifically, they found sitting led to an 112% increase in the relative risk of developing diabetes, a 147% increase in the relative risk for cardiovascular disease and a 49% increased risk of earlier death.

While the researchers involved in the study on television watching recommend further inquiry to confirm their findings, these two new studies add to the growing body of evidence that too much sitting wreaks havoc with our health.

So, do yourself a favor. Don’t just sit there. Get up every hour to move about. Use our list of 25 activities to help you light a fire under your seat. To receive a daily 2-minute break, follow  us on Twitter. 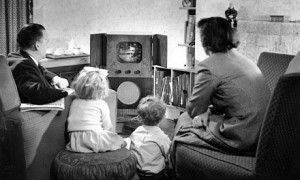