CareerBuilder Survey: Our Jobs Are Making Us Fat

Employees want you to know something: Their jobs are making them fat.

That’s the consensus from nearly 4,000 employees polled by CareerBuilder between February and March 2013.

These employees had no difficulty recognizing they were carrying more pounds than they’d like. More than half said they were overweight, and 41% say it’s their job’s fault. Specifically, their chair is to blame. “Sitting at my desk most of the day” is the primary cause of weight gain, followed by stress-related eating, buying lunch instead of brownbagging it, the office candy jar, and workplace celebrations.

CareerBuilder’s survey results correspond to a growing body of research on “sitting disease.” Not only is sitting linked to weight gain, it’s also linked to an increased risk of diabetes, heart disease, kidney disease, and cancer.

As these employees discovered, hitting the gym isn’t enough to undo the damage, on the scale or elsewhere. Three in five employees report working out on a regular basis, including 45% who hit the gym at least three times a week—mostly after work, but some beforehand. Only a handful exercise during lunchtime.

Employees often skip the noontime workout to avoid the change-sweat-shower routine, or because of the time involved. They may also prefer to keep their workouts private. That doesn’t mean they can’t exercise at lunch or throughout the day. CareerBuilder’s Rosemary Haefner, vice president of human resources, recommends building in walks to help keep the weight down. Employees can also:

Tell Us: Do you exercise at work? What works for you? 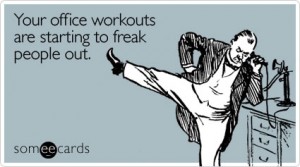