About a year and a half ago, Sodexo’s Talent Management group started including fitness breaks in their regular team calls. It’s been forward march ever since.

The idea for call-related fitness breaks came about when Arie Ball, Sodexo’s VP of talent acquisition, was reviewing reports with a member of her team, Rita Sanders. Sanders casually mentioned her personal fitness certification exam was coming soon, not realizing this would make Ball’s ears perk up.

But one half-day session per year wasn’t going to be enough to combat the sedentary nature of the team’s work, which involves a lot of time at a desk and on the phone. Plus, the team works remotely. No commute means no activity’s required to get to the job and the kitchen’s always open. “One of the reasons people don’t want to have a home office is because of the weight gain. Food’s always there!” Ball commented.

Even though Sodexo offers a company wellness program, Ball was looking for something more customized to her team’s needs. Sanders’ announcement provided the perfect opportunity. The two agreed to have Sanders lead a break on weekly calls.

Initially, Sanders verbally led the breaks. Now the team’s fully in the 21st century, using a webcam to provide easier-to-follow and more detailed instructions. “Since we started using the webcam, more people are involved,” Sanders observed.

The call-related work breaks were just the beginning. Once these became routine, individuals started personalizing their approach. “One person sets a clock every hour so she’ll walk or just get up and move about. Some people walk during other calls. Nobody has gotten a treadmill desk,” Ball commented. But what they did get was a Fitbit. Recently, Ball bought all 50 team members a Fitbit activity tracker and established a Sodexo Talent Acquisition Community. “We tie a monthly incentive to the number of steps taken. Anyone who has an average of 10,000 steps per day gets two entries in the monthly contest. If you average 6500 steps, you get one entry. Winners have their choice of a Fitbit Aria scale or a $100 Sports Authority certificate.”

Building activity into the day simply makes getting exercise easier. “It’s not finding the hour block of time. It’s doing it constantly throughout the day,” Ball remarked. “The time we take out, it’s going to pay dividends—more focus, more productivity, better health.”

Ball, Sanders and the entire Sodexo team have found an additional benefit beyond the obvious health benefits: greater camaraderie. “I continue messaging people throughout the day,” Sanders shared. “Things like ‘Why aren’t you standing up right now?!’ In return, we have a running joke during the breaks I lead. ‘What’s with the hair?!’” 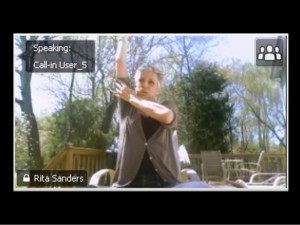