Susan Orlean, a journalist perhaps best known for providing the source material for the movie Adaptation, is the latest adopter of walking while working.

Orlean didn’t come to a treadmill desk directly. It started with self-tracking and a little competition.

“Rather than just measuring the epic around-the-block exercise walks I had begun to take, it [the Fitbit] measured all my walking, including the incidental steps I took while, say, grocery shopping or getting the mail.

“The thing with walking, though, is that it really does take a lot of time. When I ran, I could whip through five miles in forty-five minutes, but walking the same distance would take forever.

“Voila, the treadmill desk. I’m not sure where or how I first heard about the contraption, but I found out that several people I knew had one. In fact, I learned two of my Fitbit friends whose step counts were astronomical were working at treadmill desks, so suddenly those numbers made sense.”

Orlean’s journey to walking while working is part of a growing trend. The numbers don’t lie. Steelcase, the maker of one of the more expensive treadmill desk options, has seen a fivefold increase in its sales over the past five years. Other makers have seen growth ranging from four- to tenfold.

Consumers are driving some of the increase in sales, but most is driven by companies, insurers, and states purchasing treadmill desks for their workers. In 2012,  Forbes ranked a treadmill desk one of the best workplace luxuries.

The appeal is obvious. The Mayo Clinic’s Dr. James Levine, father of the treadmill desk and the term “sitting disease,” shares that the treadmill desk was how he solved the problem of getting more activity into busy days. “You have to convert chair time to walking time.”

Orlean’s piece on treadmill desks, “The Walking Alive,” runs in The New Yorker’s May 20, 2013 issue. Read an excerpt from the article. 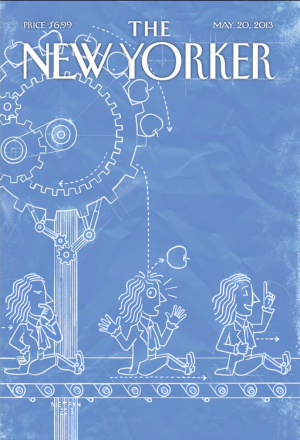